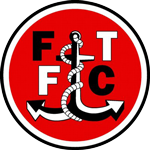 Blackpool met Fleetwood for the second time in three days in a 2-2 draw at Poolfoot Farm in a Central League Cup fixture.

Both sides fielded strong starting XI’s with the likes of Mark Howard, Michael Nottingham and Sean Scannell all starting for the Seasiders.

All four goals came in the second half, with Ryan Hardie scoring a brace before Harvey Saunders did the same for the Cod Army.

The first half failed to deliver anything of note, with the torrential rain causing real issues for the players.

The second 45 minutes sparked into live just two minutes after the restart with Ryan Hardie’s incredible effort from 40 yards out. Spotting Fleetwood’s Alex Cairns off his line, Hardie took aim from near the halfway line with the ball looping over him and into the net.

And Hardie made it 2-0 to the Seasiders just ten minutes later. Some great work down the left hand side from Sean Scannell set the striker up perfectly, who cutely finished with a back heel from three yards out.

As the wind and rain swept in, Fleetwood came back into the game on 59 minutes through a good finish from Harvey Saunders.

Saunders then levelled proceedings five minutes later with a powerful effort into the back of the net from inside the area to share the spoils at a drenched Poolfoot Farm.